Quantum of the Seas

Quantum of the Seas is the first of the Quantum-class cruise ships for Royal Caribbean International. Originally, she was one of 2, then 3, 4 and now 5 (announced October 2015) ships – her design and facilities are proving extremely popular with Royal Caribbean’s passengers.

At over 18 decks high, packed with 2,090 staterooms and carrying 4,180 guests with 1,500 crew, Quantum of the Seas is one of the largest cruise ships in the world (only dwarfed by her bigger Oasis-class sisters)

Quantum of the Seas has broken the mould for several firsts in the cruise ship industry. These included:

Additionally, a host of usual facilities found on other modern Royal Caribbean ships are also included. Such as the Flowrider and the H2O Kids Zone. All activities on the top deck are complimentary to cruise passengers, apart from the Northstar at certain times of day (sunrise, sunset for example)

The ship has 20 different restaurants and eateries throughout the ship, as well as the usual room service. Jamie’s Italian branded restaurant is one of these and the first one of the chain to be based at sea.

Deck 14 (the top deck) has a large video screen, indoor pool with retractable roof, an indoor adults only pool and solarium, the H2O Zone kids water park (with wave pool – another first!) and 4 whirlpools. Access to the NorthStar ride is also on this deck, two outdoor jogging tracks, the Flowrider, rock-climbing wall, RipCord and the ship’s mascot – a 33 foot magenta coloured bear!

Quantum of the Seas 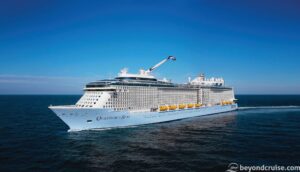