Dawn Princess is the second of three Sun-class ships ordered by Princess Cruises. She was eventually targeted to replace Pacific Princess but these plans were changed and they used Sun Princess instead. During her 2009 dry dock and refurbishment she was fitted with the popular Movies Under the Stars big screen facility on her pool deck, making her the tenth Princess Cruises’ ship to have this popular entertainment option.

She primarily operates out of ports of Australia and regularly performs circumnavigations of New Zealand and occasional cruises to Whitsundays and Vanuatu. Her popularity with Australians has led to Princess Cruises keeping her in the Australian market year after year. 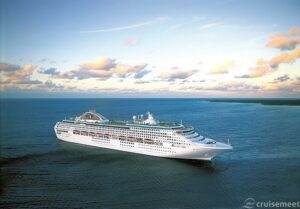