Queen Victoria is the second of the more recent Cunard Line ships. She is a Vista class ship, sharing the same physical size as ten other Carnival ships.

Quintessentially British she was built for the British market but is very popular with Americans and Australians. One of her defining differences compared to most cruise ships is her luxurious Royal Court Theatre with private boxes and one of the largest ballrooms at sea (The Queens Room), a typically British tradition. Ballroom dancing and balls take place here most nights throughout her voyages and during the day fencing classes, amongst other things are taught. Also daily, afternoon tea is served by white gloved waiters with finger sandwiches and scones with fresh Twinings tea in a nod to the ages gone by.

Queen Victoria goes back to the old age of cruising, just like her sisters, Queen Mary 2 and Queen Elizabeth by having different tiers of passengers. These are Britannia Class, Princess Grill and Queen’s Grill – each rising in fare and size of stateroom. Each also benefits from separate restaurants and the Princess and Queens Grills passengers have their own separate deck at the very top of the ship and have butler service for their own private use to their suites. Her design is Art Deco throughout with beautiful artwork literally everywhere in the ship.

As a ship that is mainly aimed at the British she doesn’t have a lot of different restaurants unlike some of more family orientated ships. She has the Britannia Dining Room which is a two deck high beautifully crafted dining room for the majority of passengers – it still does the traditional two sitting dining experience every evening. Additionally, Todd English is a restaurant available for a small cover fee and offers his trademark dishes by Boston’s star chef Todd English. The Golden Lion is the pub aboard and serves lunch and evening meals inclusive to all passengers, during the day it offers a hearty pub lunch and quizzes and in the evenings it has live entertainment. Passengers may also eat at The Lido, based on deck 9 this venue is open 24/7 and allows passengers to choose from many different fresh dishes in a buffet style with additional fresh dishes such as Pizza and Pasta being cooked to order for the passenger. Each day a different theme is offered at the Lido, such as Sunday Roast, Chinese, etc.

She also boasts one of the largest libraries at sea, with a beautiful two deck library with spiral staircase joining the two. There are over 6,000 books available for passengers to borrow throughout their voyage, if they aren’t into reading books and fancy something more ‘present day’ they can also use the onboard internet cafe, Connexions or take one of the many computer classes available aboard or perhaps watch a movie in the Royal Court Theatre.

The Royal Bathhouse is the Spa aboard Queen Victoria and offers many treatments you would find in most high-end spas. At 13,000 sq foot it is a fairly large spa that offers hot ceramic beds to lay on and a 745 gallon hydrotherapy pool to relax sore aching muscles from all the port sightseeing!

Although she isn’t a classic ocean liner (like Queen Mary 2) her bow was strengthened during her build so she could traverse the Atlantic better than other cruise ships. From the outside she has a very distinctive black and red livery that hints at the sophistication that differentiates a Cunard ship from other cruise ships. 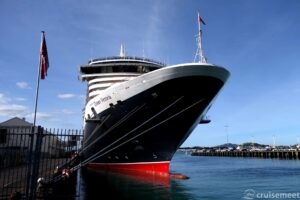