Queen Mary 2 is the flagship of the Cunard Line fleet. She is the only ocean liner in existence that performs a scheduled transatlantic crossing several times a year. She replaced the Cunard flagship, Queen Elizabeth 2 which retired in 2008.

She is much bigger than her two younger sisters and has a longer bow with straighter lines for crossing the Atlantic Ocean. She has four azipods, two of which are fixed and two which can rotate 360° which combined with her three bow thrusters allow her to manoeuvre in and out of most ports without the assistance from any tugs.

Queen Mary 2 is on the bucket list for many people allover the world and no wonder – she combines the classic elegance of the old ocean liners with today’s modern technology and benefits. With her four stabilisers she can cross the Atlantic Ocean in as little as six days in rough seas with only the smallest of movements as her heavy bow cuts through the waves. She has huge amounts of facilities available aboard to keep you entertained during voyages from fencing classes and ballroom dancing to the only planetarium at sea and recently her cinema was upgraded to allow the showing of 3D films.

She has a full wrap around deck which allows passengers to walk (or run) the entire way around the ship, it is traditional and all in teak. As the ship is so big her decks are extremely wide which allows people to use the sun-loungers (also teak) whilst people stroll by.

Queen Mary 2 has a ballroom and a classic British Winter Garden venue. She caters mainly to the British but has very strong followings from American, Australians and especially German customers who flock to the banks of the River Elbe in Hamburg every time she visits.

Her restaurants encompass a traditional buffet, called King’s Court which in the evenings is split into four different cuisines and has a special chef’s restaurant allowing passengers to watch their food be cooked before they eat it. There is also the Main Dining Room and within it a separate restaurant for the Britannia Club passengers. The Princess and Queen’s Grill passengers both have their own separate restaurants and there is also food available in the Golden Lion Pub and the various cafes.

Queen Mary 2 is unlike most cruise ships and you have to experience her to feel the true power of an ocean liner. The fabled transatlantic crossing is her speciality and should be tried at least once by every serious cruiser out there! 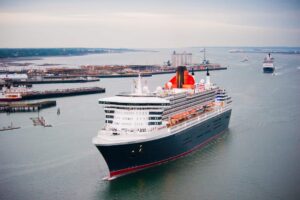