Pacific Princess was originally named R Three in 1999 until after a series of different owners she launched as Pacific Princess for Princess Cruises in 2003. Since then she has had several refurbishments, a major one in 2010 and several smaller, with the most recent being in in May 2014.

The ship is the smallest in the Princess Cruises fleet, but this does allow her to visit ports that her bigger sisters are unable to get into, such as Dover, UK and some smaller ports in Norway. Throughout the summer she performs roundtrip cruises to Norway from the UK and Europe. In the winter she sails a 111 day world cruise which originates in Los Angeles.

The ship itself is aimed more at adults than families purely based on her size and being unable to have all the facilities children usually enjoy, for example only one swimming pool is available. Passengers can enjoy two specialty restaurants aboard and also have the traditional main dining rooms, there are also numerous bars around the ship and the usual facilities, such as a spa / fitness centre, library and casino are available. 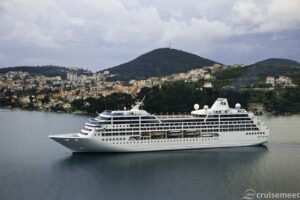