MS Maasdam is named after the Maas River in the Netherlands. She features a two-tiered Rotterdam Dining Room and a fully teak deck. She features Lanai staterooms which have mirrored glass doors that open directly onto the Promenade deck.

Featuring an interior motif that pays homage to the historical Dutch East and West India companies of the 17th through 19th centuries, the centrepiece of this elegant ship features Luciano Vistosi’s “Totem,” a monumental sculpture using nearly 2,000 glimmering pieces of glass, prominently displayed in a soaring three-story atrium.

During the summer months MS Maasdam spends her time on roundtrip cruises from Seattle up to Alaska. In the winter she relocates to Sydney, Australia and performs cruises round the entire coastline of Australia and some cruises to the Fiji Islands and New Zealand. 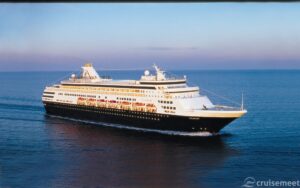