Island Princess is one of only two ships in the entire Princess Cruises’ fleet that is built to Panamax-specifications, this means she can sail through the Panama Canal (note: Since June 2016 the Panama Canal expansion has opened, allowing much larger ships to use this route)

The ship sails several roundtrip cruises to Alaska from Vancouver in the Summer. In the winter she sails from Fort Lauderdale to Los Angeles via the Panama Canal (15 days) and the same in reverse for those wishing to travel the opposite way (usually passing her sister ship, Coral Princess)

The ship offers many facilities found on Princess Cruises’ other ships including the delightful Movies Under the Stars – spend the night watching a movie, concert or sporting event outdoors in plush lounge chairs with a snacks and drinks service! 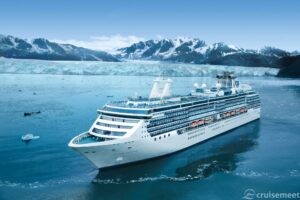