Grand Princess was the first of nine Grand-class ships by Princess Cruises, ordered originally in February 1994. At the time, she was the largest and most expensive cruise ship to be built. Her interior decor is fairly familiar to her Sun-class sisters, although she does have the ever-popular Movies Under the Stars big screen fitted to her pool deck and a new The Sanctuary Spa adults-only area open deck.

She originally had a nickname as “the shopping trolley” as her Skywalkers Lounge nightclub looked like a large handlebar suspended at the rear of the ship, this was removed in 2011 during a massive refit and has now contributed to 3-4% a year in fuel savings.

She primarily sails from her homeport of San Francisco, California either South to the Mexican Riviera (via Hawaii) or North towards Canada. During the summer she also occasionally sails to Alaska from Seattle. 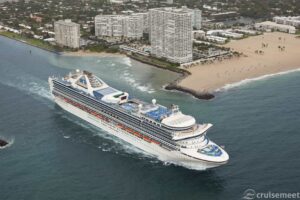