Azamara Journey offers a small boutique-hotel like cruise experience. With a higher than average crew:passenger ratio she offers more attention to detail on service, excursions, dining and also due to the size of the ship – smaller ports that can’t be visited by the larger cruise ships.

She doesn’t generally homeport in any region. Instead, she moves around the world to different regions throughout the year and runs longer than average cruises from them (14-28 days) – as most of the costs in a cruise are included in the fares, combined with the aforementioned crew ratio and ports – she appeals to the luxury or well-travelled cruise passenger, usually without children. 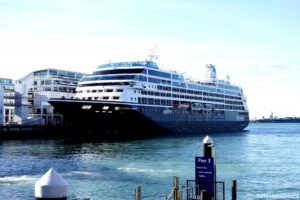