Anthem of the Seas

Anthem of the Seas is the second in the series of Quantum-class ships that Royal Caribbean has ordered out of a total of 5. She was built in the Meyer Werft river-locked shipyard in Papenburg and floated out down the River Ems. She is identical to her sister ship Quantum of the Seas apart from a few features, like her mascot and a few shops in the Royal Esplanade. The restaurants, staterooms and entertainment options are identical.

Anthem of the Seas contains numerous cruise-ship firsts which mirror her sister Quantum of the Seas.

The ship has 20 different restaurants and eateries throughout the ship, as well as the usual room service. There is no main formal dining room like other cruise ships, and instead guests reserve tables at one of the venues on the ship each evening. There is a system in place for guests to move to a different restaurant each evening with the same table mates and waiters. Each venue has the same menu each evening, allowing guests to enjoy a variation of food across the ship. Jamie’s Italian (of fame Jamie Oliver) has a branded restaurant and is the second one of the chain to be based at sea (the first one was Quantum of the Seas)

Anthem of the Seas 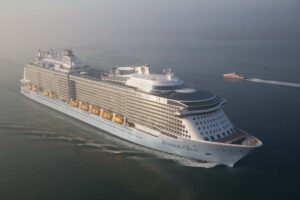